Over the past decade, a number of exciting development projects have taken place downtown. Now, TRIAD1828 CENTRE graces the historic Camden waterfront, creating a landmark.

Located in the shadow of the Ben Franklin Bridge at Two Cooper Street, TRIAD1828 is the new home of three companies that came together to honor their joint commitment to the City of Camden: Conner Strong & Buckelew, NFI, and The Michaels Organization.

Built to LEED standards, Triad1828 is equipped for offices, two ground-floor restaurants from renowned chef Michael Schulson, and a beautiful indoor/outdoor leasable event space overlooking the Delaware River and Philadelphia, TRIAD1828 proudly aims to serve as a symbol of the newest era of Camden’s distinguished history. Read the press release.

“Triad” means a group of three closely related things. In music, it refers to three notes coming together in harmony — an apt description of the partnership among the three owners of TRIAD1828 coming together to drive the revival of Camden’s waterfront. This visionary project represents the farsighted commitment of the resident companies’ three owners: the Norcross family (Conner Strong & Buckelew), the Brown family (NFI), and the Levitt family (The Michaels Organization). This triad of business leaders has a long history of investing in the success of the Camden region through job creation, philanthropy, and civic leadership.

Since the 17th century, Camden has been an important point along the northeastern corridor of today’s United States. Incorporated in 1828, the city was long a transportation hub, known for its ferry crossing to Philadelphia helping to connect commerce from Virginia to New York. Later, companies like Campbell Soup, New York Shipbuilding Corporation, and RCA found their home near TRIAD1828 CENTRE. This new landmark’s name evokes the leaders who are making Camden’s resurgence possible and the rich history Triad’s owners are determined to help reclaim. 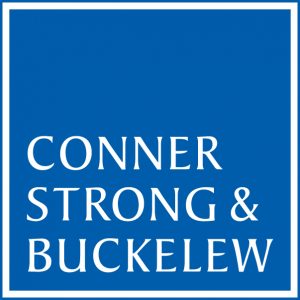